Hearty Dishes From Breakfast to Lunch

Memo’s Kitchen in Medford, OR offers a wide selection of American and Mexican-inspired meals. Check out our menu below.

Huevos Rancheros: $13.99
2 eggs over a fried tortilla smothered in a sauce of your choice (red, green, or homemade salsa) and covered with melted cheese; served with refried beans and seasoned home fries with onions and peppers and a side of tortillas

Breakfast Tacos: $13.99
3 soft tacos stuffed with ham, scrambled eggs, and cheese; served with hash browns and a side of salsa

Burrito Ahogado: $13.99
Breakfast burrito stuffed with eggs and your choice of 2 ingredients, and covered with red or green sauce; served with rice and refried beans

Chilaquiles and Eggs: $13.99
Deep-fried corn tortilla chips drowned with our delicious green or red sauce, and covered with onions, cilantro, Mexican cheese, and sour cream; served with 2 eggs your way and house-grilled bread

Enmoladas and Eggs: $13.99
3 fried tortillas filled with Mexican Cheese, covered with our delicious mole sauce and then topped with your choice of eggs, garnished with cheese, cilantro, onions and sour cream along with rice and beans.

Enchiladas and Eggs: $13.99
3 enchiladas stuffed with chicken and covered with red or green sauce; topped with onions, cilantro, Mexican cheese, and sour cream; served with 2 eggs, rice, and beans

Machaca Con Huevo: $13.99
Shredded seasoned beef, onions, and tomatoes scrambled with eggs and cheese; served with rice, beans, tortillas, and a side of salsa

Breakfast Burrito: $13.99
2 scrambled eggs with onions, bacon, and cheese wrapped in a flour tortilla and topped with sour cream; served with hash browns and a side of salsa

Bacon or Sausage and Eggs: $12.99
2 eggs your way and your choice of 4 bacon strips or 4 sausage links

Served with rice, beans, and tortillas

Everything is for $8.99, inclusive of a drink. Dessert is not included.

Roasted Garlic Fries: $10.99
Generous portion of french fries, tossed with roasted garlic, onion, cilantro, and parmesan cheese then served with sour cream and a side of salsa

Loaded Potatoes Wedges: $10.99
Seasoned and deep fried potato wedges, topped with cilantro, onions, tomatoes, bacon and cheese, served with a side of ranch

Hot, delicious homemade soup right here in Memo’s Kitchen; ask your server for the soup of the day.

Taco Platter: $12.99
Your choice of 2 big tacos pork Al Pastor or carne asada with cilantro and onion. Along with rice, beans, lime and salsa

Quesadilla: $12.99
Your choice of carne asada or pork Al Pastor along with rice, beans, lettuce, tomatoes, sour cream and salsa

Carnitas Platter: $13.99
Slow cooked pork carnitas, topped with cilantro and onion. Served with rice, refried beans, warm tortillas and a side of salsa.

Enmoladas: $13.99
3 fried tortillas stuffed with chicken and covered with a delicious mole sauce made with a mixture of dry chiles, nuts, seeds, and vegetables; topped with Mexican cheese, cilantro, onions, and sesame seeds; served with rice and refried beans

Supreme Burrito: $13.69
Your choice of carne asada or pork Al Pastor, filled with rice, beans, cheese, tomatoes, onions and lettuce, along with salsa and sour cream

All sandwiches are served with your choice of fries, onion rings, coleslaw, cottage cheese, or salad. All Combos come with a Fountain Drink of you choice.

Our 1/3 pound burgers are served with a choice of French fries, onion rings, coleslaw, cottage cheese, soup, or salad. all Combos come with a Fountain Drink of your choice.

Fajita Salad: $13.99
Seasoned chicken with grilled onions and peppers over mixed salad in a tortilla shell; topped with shredded cheese, olives, tomatoes, green onions, avocado, sour cream, and a side of salsa

The Scrambler: $10.29
2 scrambled eggs with your choice of 2 ingredients, plus cheese; served with hash browns and toast

French Toast: $10.29
2 triangles of French toast with 1 egg and a choice of 2 bacon strips or 2 sausage links

Pancake Combo: $10.29
Buttermilk pancake served with 1 egg and a choice of 2 bacon strips or 2 sausage links

Burger: $9.49
Burger topped with lettuce, tomatoes, onions, and mayonnaise; served with your choice of fries, onion rings, soup, or salad 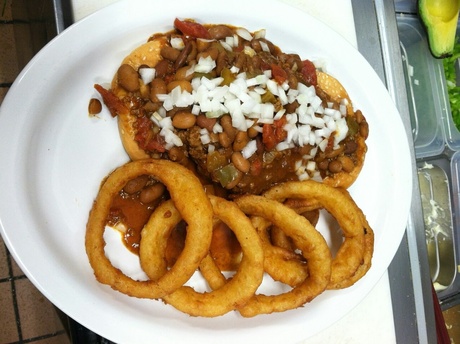 Consuming raw or undercooked meat, poultry, seafood, shellfish, eggs, or unpasteurized milk may increase your risk of getting foodborne illnesses.